So I have been a bit sick lately my asthma played up pretty bad and I have been waiting for it to get better for 2 weeks now. I have always thought about my asthma as something I had and just had to take my meds for but not as an actual disease, never realized how sick it could make me, off course there had been episodes but not like this before. I got a prednisone course and another inhaler, I have 6 now but that’s ok because it works. Things are getting better and since yesterday I can breathe freely again, as long as I don’t get to active. So I have been on a rest regime which made me seriously bored, haha. I have done a few ski training’s and went for a very easy short bike ride on a low heart rate today. Skiing was good but the bike ride might have been a tad to soon because I got symptoms again, but it was such a great day sunny and cold, and that's where meds are for so I’m fine. And I have spend a lot of time with friends which is always nice.

I made a new video with some of the footage of my coach, there is GS on it as well, like I said I have a lot of work in GS…

Next weekend I have an event in Landgraaf, a ski marathon in which teams of 2 skiërs/boarders will try to ski the distance to Sochi 2646 km in 14 hours during the night, to raise money for the paralympic skiers on their way to Sochi. It will be a great event, looking forward to it. https://www.facebook.com/event.php?eid=220212728035615

And 3 weeks later we have the season opening races in Landgraaf, Matthias Lanzinger who lost part of his leg after a Super G crash in 2008 will make his entrée in these races, so that will be pretty interesting.
http://www.universalsports.com/news-blogs/article/newsid=562153.html#matthias+lanzinger+eyes+paralympics+after+amputation
http://sport.orf.at/stories/2085096/2085093/
Posted by Annika van der Meer at 8:28 AM No comments: Links to this post

I have thought a while about writing this, but hey it’s a blog which basically means it’s my public diary and I can write here whatever I think and want out there.

Every now and then people who know about my leg but don’t exactly know what’s wrong, which I can’t blame anyone for because it has been unclear for a while, come to me (or my parents) and they say things like I know this famous orthopedic surgeon, the best of the best, or why don’t you go to the US to fix your leg or why don’t you get a prosthetic knee. And I know it all comes from a good place, everyone whishes me the best, but I’m saying it once and (hopefully) for all; I DON’T NEED FIXING my life doesn’t suck I am completely happy and I have accepted my leg. I have seen more than enough (famous) orthopedic surgeons, I know I have tried it all, there is just nothing to fix. As long as doctor’s don’t know how to grow back muscles, there is nothing they can do, except for giving me an orthosis. A prosthetic knee won’t work because it still needs muscles to function, which I lack because they where to severely damaged. I’m sorry if I have offended anyone by writing this. It makes me sad when people have pity on me, because it isn’t necessary.
I have two great ortheses which give me the possibility to walk, jump, ski and run (sort of).  I have an amazing physical therapist who helped me master all those things. I can ride a bike, drive a car and can’t think of any important things I can’t do, yeah except for buying shoes which is a problem with my orthosis, but if that’s all!?
My life is good, I have amazing friends and family, I’m doing good in med school, which has been my dream since I was 6 years old and asked for an anatomy book for Christmas, and off course there is skiing.... 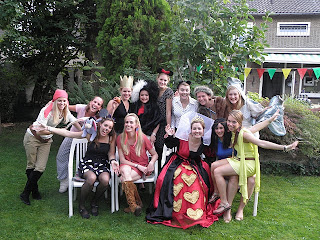 @ a Disney themed birthday party of  one of my friends, great night. 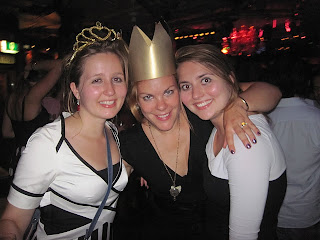 People can always help me by suporting me to pursue my dream to become a Paralympic ski racer in every way possible and I still need funding for this season, every tiny bit helps.

On November 17 and 18 there is an IPCAS race in Snowworld Landgraaf, last year I wasn’t able to compete because I broke my ankle, but things are looking good for this year. It will be my second first race so I don’t exactly know what to expect, I have done a lot of training over summer and fall and there is still a lot to come so I’ll be ready, I guess ;-). For more information about the race follow this link: http://www.ipc-alpineskiing.org/export/sites/ipc_sports_alpine_skiing/Downloads/2010_11_IPCAS_NED_Invitation.pdf

Posted by Annika van der Meer at 10:28 AM No comments: Links to this post

I had a great training camp in Hintertux, we have had some amazing conditions with lots of sun.
It was a giant slalom (GS) camp; 2 days of GS free skiing and 4 days of training in the gates. 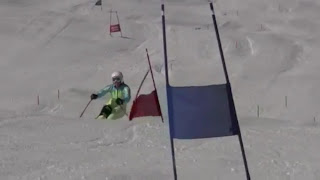 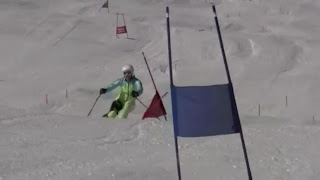 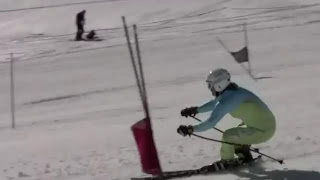 This was the first time I actually trained GS since I started skiing again. And I have to learn a LOT feeling isn’t there yet but I’m sure it will come back. With slalom I sometimes have a ‘glimpse’ of what it used to feel like and I have had a lot more slalom training since I started skiing again. That said I did made progress took some good steps still about a million to go but hey it’s all about the process, I love to ski and I like to learn. 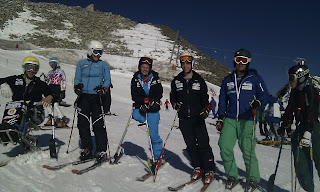 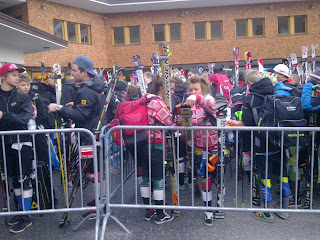 We skied in the morning until the snow got to soft, usually around noon. In the afternoon we went cycling or did some balance training and one afternoon we just enjoyed the sun.
In the valley it was summer so I got a tan and not just on the lower half of my face. 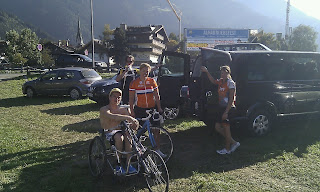 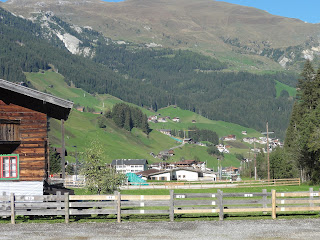 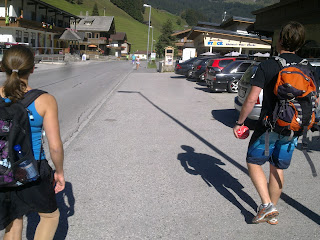 The last afternoon after skiing we climbed from Lanersbach to Hintertux by bike, the spring of my one legged cycling system broke just before I left for this camp, so my left leg did it all alone it was hard but I was happy that I made it, I knew I could, just had to do it. The downhill was a cool reward after hard work. The week flew by so fast, I had a great time! Now I’m back to business as usual for a month, life is great. 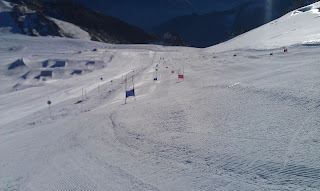 Last weekend I had a race in Snowworld it was a national race and I raced with abled body racers, I also did some of those races in the spring of 2010. The race was ok my first run was good the second run not so much but overall my time improved I'm getting a lot closer to the other racers and I beat people, getting to the middle of the field. 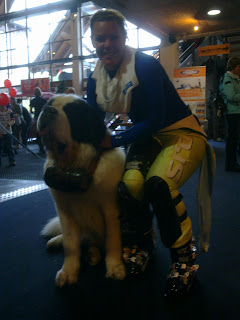 Made a new friend :)
Posted by Annika van der Meer at 1:09 PM No comments: Links to this post

Annika van der Meer
I LOVE SKIING! a couple of years ago I tore my ACL. During the surgery my leg sustained ischemia, as a result of that I've severe muscle weakness in my right leg. I use an orthosis (a full leg brace from foot till hip) for pretty much everything, without it I can't walk or bear weight on my leg. I use a different orthosis for skiing, which is specially designed for me. After my fair share of mourning I found out that there still are a lot of things I CAN do. I used to be a ski racer before my surgery and in october 2009 I started skiing again. And now I'm racing again in the women standing category, LW3. As part of the development program I am supported by the Johan Cruijf foundation and the Dutch ski federation big shout out for them, but I still need sponsors to keep doing what I love. I'm in medical school, so one day I will be a doctor (hopefully ;)). It is here that I hope to keep you up to date on my training, racing and my life in general. Life is great and I'm enjoying every second. www.annikavandermeer.nl for more information Dutch website 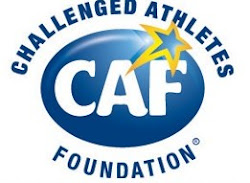 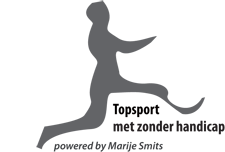 I’m dedicated and training hard to develop in to the best ski racer I possibly can be. I love skiing since I was a toddler and after everything what happened with my leg I’m glad to have another chance to race and chase my dream. In order to compete in alpine skiing and to develop myself I need support. If you are interested to support me and follow me in my journey please contact me at annika@annikavandermeer.nl 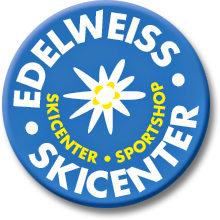